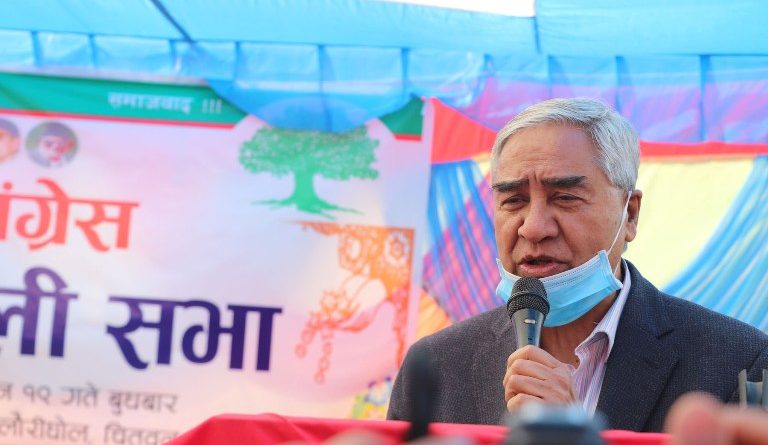 Chitwan, March 3 : Nepali Congress President Sher Bahadur Deuba has said NC would not shrug off responsibility. “If the situation arises for NC to take a lead in government, it would not deny this responsibility,” President Deuba said at a programme organized here to pay tribute to party leader Eknath Ranabhat on the 10th day of the latter’s demise.

He said it in response to senior leader Ramchandra Poudel’s view that NC should stay in opposition rather than join government. “It does not mean NC is greedy for power and post. But, if the situation develops for its leadership, it does not miss the chance either,” he reiterated.

President Deuba further said, “Ramchandra Ji, don’t worry if I become Prime Minister. My premiership is beneficial to party leaders and cadres. I don’t think you dislike me as next Prime Minister.” The former Prime Minister urged leader Poudel not to be narrow-minded but accommodative.

He lamented that his wish to make the late Ranabhat minister was not fulfilled.

On the occasion, senior leader Poudel reminded that NC was in the role of major opposition and it should continue staying in opposition. Poudel asserted, “The NC should play the role of opposition party in a right manner.”

According to him, although NC had limited number of lawmakers in the parliament, their roles and responsibilities were huge. He viewed that the NC could emerge as a strong party in the parliament if it could safeguard the democracy and remained aware and alert. “It is the only NC which the Nepali people can bank on. The party should deliver accordingly,” he underscored.

He warned that conspiracies were being hatched by the national and foreign elements against the democracy in Nepal.

On a different note, he commended the contributions of late Ranabhat to the NC and said new generation of NC could learn devotion and sacrifice from him.

Ranabhat, who was also once parliamentarian, had passed away on February 22 while undergoing treatment. He was 66 and suffered a stroke.